Guide book to the trail and sites of General Lafayette’s  9-day Grand Tour of Alabama.  Thirty-seven places, from the Chattahoochee River across from Fort Benning, GA, through the lands of the Creek Nation, to Montgomery, then south along the Alabama River to Selma, Old Cahawba (Cahaba today), the ghost town of Claiborne, then Mobile and Mobile Point.  Photographs, dozens of maps, driving directions, walking tours of Fort Mitchell, Montgomery, Cahawba, Claiborne and Mobile Lafayette tour sites.  Plus other historical sites along the way!

In 1824, President James Monroe invited the last surviving General from the Revolutionary War, the French-born Marquis de Lafayette, to return the United States to help celebrate the 50th anniversary of the Revolution.  Among the 24 states Lafayette visited in over 12 months was Alabama.  He spent nine days traveling from the Chattahoochee River, through the Creek Indian Nation along the Federal Road—arguably the first Interstate highway—to Montgomery, then down the Alabama River via the new, fast transportation, the steamboat, to tropical, and formerly French, Mobile, and Gulf Coast forts at Mobile Point.

And how would you travel the route today?

Nine Days Traveling is your guide book to Lafayette’s Grand Tour of Alabama, with dozens of maps, more than 50 total

Don Noble, Tuscaloosa News, June 6, 2021
‘Lawrence Krumenaker, in “Nine Days Traveling”,…..has meticulously traced every step Lafayette took and has written out a plan whereby we can follow the same route, but by car,…..Now that we are able to move freely about, following Lafayette around Alabama might be great fun for the historically minded.”  Also on Don Noble’s Book Reviews on Alabama Public Radio June 15, 2021.

Hermograph Press is a small publisher of astronomy and historical travel books and astronomical education materials, based in Opelika, Alabama. It features the works of Dr. Larry Krumenaker. 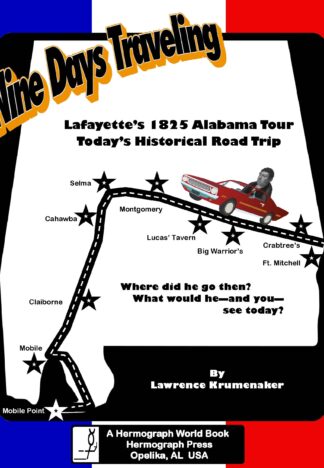